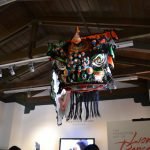 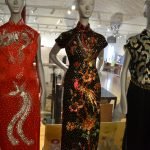 From Manchu to China Chic: the Evolution of the Qipao Part II

Underground Chinatown: Racism at the Fair

ANNOUNCING THREE EXHIBITIONS AT THE CHSA MUSEUM “THE FORGOTTEN ART OF LION DANCE PUZZLES,” “FROM MANCHU TO CHINA CHIC: THE EVOLUTION OF THE QIPAO,” AND “UNDERGROUND CHINATOWN”

The Chinese Historical Society of America (CHSA) is pleased to announce three exhibitions, “The Forgotten Art of Lion Dance Puzzles,” “From Manchu to China Chic: the Evolution of the Qipao,” and “Underground Chinatown.” They were unveiled in March and April 2015 and have been enjoyed by visitors from all over the world.

“The Forgotten Art of Lion Dance Puzzles” is curated by Corey Chan and is based on his forthcoming book about the subject. These puzzles are physical and mental challenges done by lion dancers, reserved for special occasions such as the opening of a new business or blessings for newly wedded couples. Chan says they are “entertaining performances which underline our universal human desires to live happier lives.”

Performed by lion dancers for centuries, this tradition is currently on a decline, making it a “forgotten art.” Lion dance puzzles take time and knowledge of martial arts, but younger generations are only being taught the competitive form of the dance. The exhibition is currently held at the Choy Gallery, featuring artful arrangements of lion dance puzzles using items such as oranges, vases, and bowls. “Kei Lun Lion Dancers Find New Meaning in Ancient Steps”, a KQED video, plays on a loop, serving as an introduction to Chan and lion dancing.

“From Manchu to China Chic: the Evolution of the Qipao,” curated by Sally Yu Leung, can be found in the Yick Gallery. The qipao (mandarin gown or cheongsam) has a hybrid design combining elements from Han Chinese, Manchu and Western clothing. The exhibition features dresses, old posters, and accessories on loan from private collections spanning 1890s to 2000s. Visitors will see the qipao’s evolution: from when it was fashionable to socialites, to being a symbol of a bourgeois lifestyle, eventually becoming a cultural icon. This exhibition is a three-part series. it is currently on “Part Two: Adornment Craze” reflecting the more stylized, elaborate, over-detailed, multi-colored, and multi-thematic styles of women’s wear in China.

“Underground Chinatown” depicts a veiled view of an opium den, presented as a mix of myth and reality, an ambiguous portrayal of American Chinatown at the 1915 Panama-Pacific International Exposition. CHSA’s Learning Center was transformed into a scenic environment with backdrops of opium den imagery, prop furniture and real opium-smoking paraphernalia. Pam Wong and Gordon Chun of Gordon Chun Design curated the exhibition with ephemera contributed by private and in-house collections and photos from California Historical Society and California libraries. A video is played on loop, showing how the Chinese were portrayed during the silent film era.

“Treatment of Chinese were harsh during the period of Exclusion,” Wong said. “With this exhibit we hope it opens up conversations regarding current immigration and race issues. ‘Underground Chinatown’ shows how racism penetrated into mainstream media and entertainment.” Visitors from all over the world have rightfully been raising questions about opium use and legality, stereotypes shown in the silent films, and some have even remarked that they had never even know that the Chinese Exclusion Act happened.

CHSA Executive Director Sue Lee says that these exhibitions are not only points of fascination with our visitors, but is in keeping with our organization’s mission. “As stewards of historical preservation, it is our duty to promote historical and cultural aspects of Chinese traditions that are celebrated all over the world, but have lost sight of historical perspectives,” Lee said. “Our staff and curators worked tirelessly putting these exhibitions together, and we’re proud to present them to the public.”

Visit chsa.org for museum hours and other information. Museum admission is free but donations are highly encouraged.