You are here: Home / CAEI / What was the Chinese Exclusion Act? 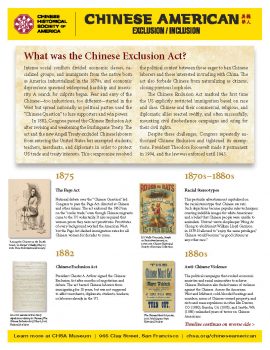 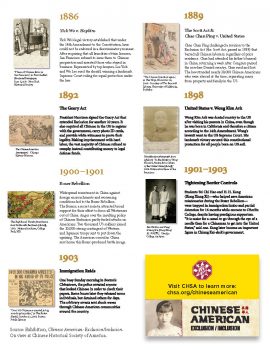 Intense social conflicts divided economic classes, racialized groups, and immigrants from the native born as America industrialized in the 1870s, and economic depressions spawned widespread hardship and insecurity. A search for culprits began. Fear and envy of the Chinese—too industrious, too different—started in the West but spread nationally as political parties used the “Chinese Question” to lure supporters and win power.

The Burlingame Treaty of 1868 had allowed for open immigration between the US and China. But in 1882, Congress passed the Chinese Exclusion Act after revising and weakening the Burlingame Treaty. The act and the new Angell Treaty excluded Chinese laborers from entering the United States but exempted students, teachers, merchants, and diplomats in order to protect US trade and treaty interests. This compromise resolved the political contest between those eager to ban Chinese laborers and those interested in trading with China. The act also forbade Chinese from naturalizing as citizens, closing previous loopholes.

The Chinese Exclusion Act marked the first time the US explicitly restricted immigration based on race and class. Chinese and their commercial, religious, and diplomatic allies reacted swiftly, and often successfully, mounting civil disobedience campaigns and suing for their civil rights.

Despite these challenges, Congress repeatedly authorized Chinese Exclusion and tightened its exemptions. President Theodore Roosevelt made it permanent in 1904, and the law was enforced until 1943.

Chinese American: Exclusion/Inclusion at the Chinese Historical Society of America is made possible with the support of Seligman Family Foundation, Robert Joseph Louie Memorial Fund, and Committee of 100. Based on the exhibition Chinese America: Exclusion/Inclusion, organized in 2014 by the New-York Historical Society, through the leadership support of Oscar Tang and Agnes Hsu-Tang—Tang Family Foundation, and generous funding from Bernard and Irene Schwartz, the National Endowment for the Humanities, the Institute of Museum and Library Services, the Achelis and Bodman Foundations, Harold J. and Ruth Newman, and other supporters. Exhibition collaborators: Museum of Chinese in America (MOCA), Committee of 100, Filmmaker Ric Burns’ Steeplechase Films, California Historical Society