Author Karen Kao presents: “The Dancing Girl and the Turtle” 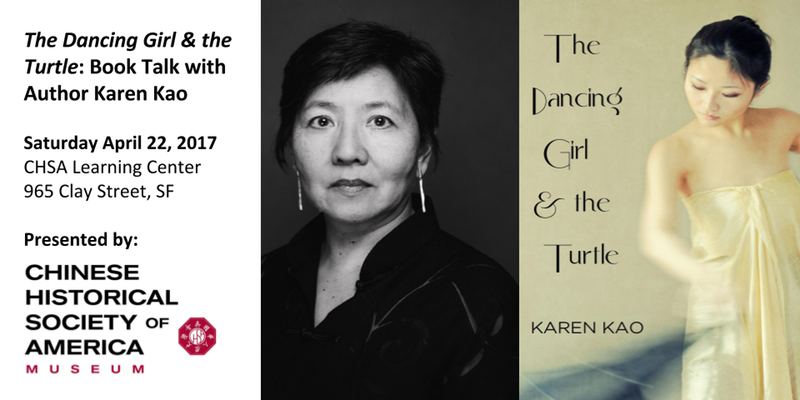 A rape. A war. A society where women are bought and sold but no one can speak of shame. Shanghai 1937. Violence throbs at the heart of this powerful new novel.

This elegant novel breaks barriers with its brutally honest account of the courtesan culture in 1930s Shanghai. In a searing portrayal of women as commodities, Song Anyi, a rebellious young woman, is thwarted by her conventional family, the social mores of the day and the war with the Japanese that is about to engulf China.

The Dancing Girl and the Turtle is one of four interlocking novels set in Shanghai from 1929 to 1954, collectively entitled The Shanghai Quartet.

WHAT: Book Talk and Signing with Author Karen Kao on The Dancing Girl & the Turtle
WHEN: Saturday, April 22, 2017 from 1:00pm-2:30pm
WHERE: CHSA Learning Center (basement of the museum, 965 Clay Street, San Francisco)

RSVP: On Eventbrite– Tickets purchased for the event also include admission to the museum exhibit: Chinese American: Exclusion/Inclusion

ABOUT THE AUTHOR:
Karen Kao was born in Los Angeles, California, USA on 21 September 1959 to Chinese immigrants who settled in the United States in the 1950s. She attended Catholic primary school in Montebello and an all-girls secondary school, Ramona Convent.
Karen obtained her undergraduate degree in English from the University of California Irvine in 1981, graduating with honors. This was the phase in her life when Karen crossed paths with Charles Wright (U.S. Poet Laureate 2014-2015), her teacher, and Yusef Komunyakaa (Pulitzer Prize winning poet), her friend.

Rather than pursue her dream of writing, Karen followed her father’s advice and enrolled at Georgetown University Law Center. She graduated in 1984, again with honors, and immediately began practicing law in the Washington, DC office of a Boston-based law firm. She fell in love with a Dutchman and abandoned her career as a fledging US lawyer to move with him to Amsterdam in 1989.

Unfazed by the new language, culture and legal system, Karen launched a second career. She returned to school to obtain her Dutch law degree from the Rijksuniversiteit Leiden, while training on the job at a firm in Utrecht. Karen eventually became a partner and head of the corporate law department at an Amsterdam-based law firm. Her métier was cross-border mergers and acquisitions, a field of law that requires hard-nosed negotiating skills and an ability to survive on very little sleep.

In 2011, she abandoned the law, embarking on a third career: a return to her love of writing and the stories she heard as a child of Old Shanghai. She has since taken fiction workshops from Lan Samantha Chang at the Paris Writers Workshop (2014) and Yiyun Li at the Napa Valley Writers Conference (2016).

Karen holds dual citizenship in the United States and the Netherlands. She is married with two children and lives in Amsterdam.
Check out her new blog Shanghai Lady