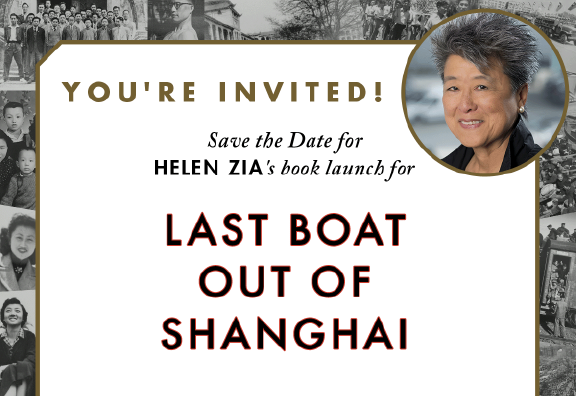 Join us for a special community book launch event for Helen Zia’s new book, Last Boat Out of Shanghai, hosted by Chinese Culture Center (CCC) in partnership with CHSA, Chinese for Affirmative Action (CAA), Asian Americans Advancing Justice—Asian Law Caucus, Center for Asian American Media (CAAM), East Wind Books, 1990 Institute, and other community partners to be announced. The release party will feature a talk with Helen Zia, followed by a Q&A and book signing, and your opportunity to purchase a copy of Last Boat Out of Shanghai. Light refreshments will be served.

Last Boat Out of Shanghai is based on the “dramatic, real-life stories of a generation caught up in the mass rush out of Shanghai in the wake of China’s 1949 Communist Revolution” that parallel the struggles faced by emigrants today. Zia weaves together the stories of four young Shanghai residents who wrestled with the decision to abandon everything for an uncertain life as refugees in Hong Kong, Taiwan, and the U.S.

Seating is limited. Reserve your seat today at Eventbrite.com

ABOUT LAST BOAT OUT OF SHANGHAI: 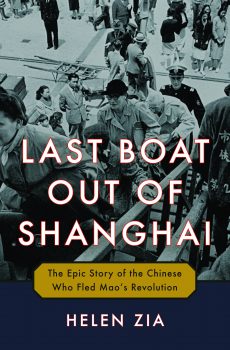 Stories of courage and resilience emerge from decades of oppression. On May 25, 1949, the People’s Liberation Army marched into Shanghai, completing Mao’s victorious takeover of China. Coinciding with the 70th anniversary of that revolution, Chinese-American journalist Zia (Asian American Dreams: The Emergence of an American People, 2000, etc.), former executive editor of Ms. magazine, vividly chronicles the lives of several individuals caught in the violent “tsunami of revolution” in China’s “biggest, most glamorous, and most notorious city,” the port where throngs of Chinese rushed to escape.

“Meticulously researched with a scholar’s acumen, the pages unfold with the harrowing suspense of a novel. Zia’s portraits are compassionate and heartbreaking, and they are, ultimately, the universal story of many families who leave their homeland as refugees and find less than welcoming circumstances on the other side.” —Amy Tan, author of The Joy Luck Club and The Valley of Amazement

In early May 1949, the World War II transport ship General Gordon was the last boat out of Shanghai, culminating an exodus that sent millions of Chinese to seek refuge throughout the world. In a narrative gleaned from more than 100 interviews, Zia focuses on four exiles whose stories represent “the voices, viewpoints, and character of the Shanghai diaspora”: Benny Pan, Ho Chow, Bing Woo (the author’s mother), and Annuo Liu.

After the war, the arrival of American soldiers and the ousting of Japanese soldiers and civilians augured stability, but a civil war between Nationalists and Communists led to more privations, an atmosphere of suspicion, and virulent repression. With captivating detail, the author reconstructs the tense “panic to flee” that engulfed the nation. An absorbing history of a refugee crisis that mirrors current events. 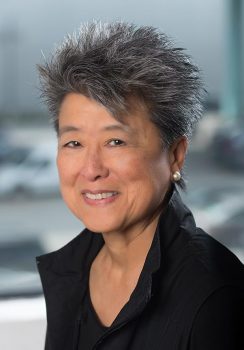 Helen Zia is the author of Asian American Dreams: The Emergence of an American People, a finalist for the prestigious Kiriyama Pacific Rim Book Prize and referred to by President Bill Clinton in two separate speeches in the Rose Garden. She coauthored, with Wen Ho Lee, My Country Versus Me, which reveals what happened to the Los Alamos scientist who was falsely accused of being a spy for China in the “worst case since the Rosenbergs.” She was Executive Editor of Ms. Magazine and is a founding board co-chair of the Women’s Media Center. Her articles, essays and reviews have appeared in numerous publications, books and anthologies, receiving awards for her ground-breaking stories.

The daughter of immigrants from China, Helen’s work on the 1980s Asian American landmark civil rights case of anti-Asian violence is featured in the Academy Award nominated documentary, Who Killed Vincent Chin? and she was profiled in Bill Moyers’ PBS series, Becoming American: The Chinese Experience. In 2008 Helen was a Torchbearer in San Francisco for the Beijing Olympics amid great controversy; in 2010, she was a witness in the federal marriage equality case decided by the US Supreme Court. Helen is a board co-chair emerita of the Women’s Media Center; she received an honorary Doctor of Laws degree from the Law School of the City University of New York for bringing important matters of law and civil rights into public view.