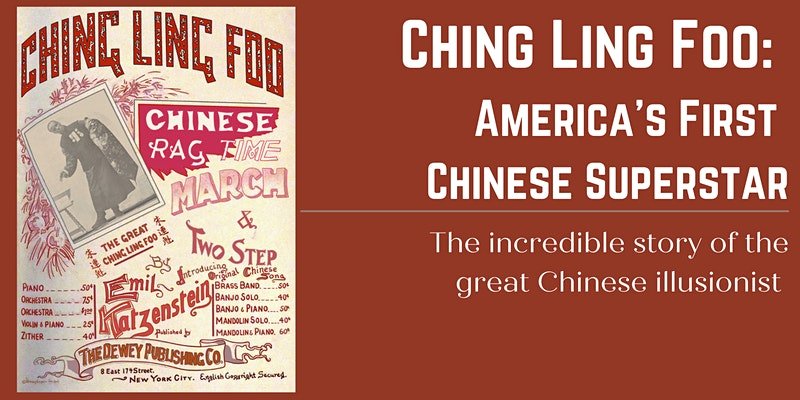 Join CHSA and author Samuel Porteous for the incredible story of the magician Ching Ling Foo. At the height of anti-Chinese xenophobia and passage of the Chinese Exclusion Act, Ching Ling Foo, one of the greatest illusionists ever seen on American soil, overcame stage attacks, deportation attempts that generated national headlines, tragedy, and more to make a remarkable impact on American culture. Foo, along with his talented family of Chinese musicians and acrobats, would become the highest paid and one of the most popular acts in the United States, not just once, but twice throughout the Exclusion Era.

Join CHSA as author Samuel Porteous takes the audience through Foo, the incredible story of the Foo troupe’s rollercoaster ride to unprecedented fame and luxury private railcar riding fortune. Along the way, guests will experience the excitement of the 1898 World’s Fair, turn of the century Broadway, the Boxer Rebellion, the bizarreness of early 1900s vaudeville, the 1905 London World Championship of Chinese Magic, and a bilingual toddler who transitions to teenage ragtime sensation. RSVP today to learn about the remarkable story of Ching Ling Foo, the Chinese magician that was more famous than Harry Houdini.

The presentation will last from 12pm-1:30pm. Following his book talk, audience members will be able to ask Samuel questions about the book and his work until 2pm. Advanced questions can be submitted to info@chsa.org.

You can find more information about Samuel’s book and other creative endeavors on his website.

Reserve your spot today! Tickets are available with a suggested donation of $10 to CHSA. Space is limited; we encourage you to get your ticket early.