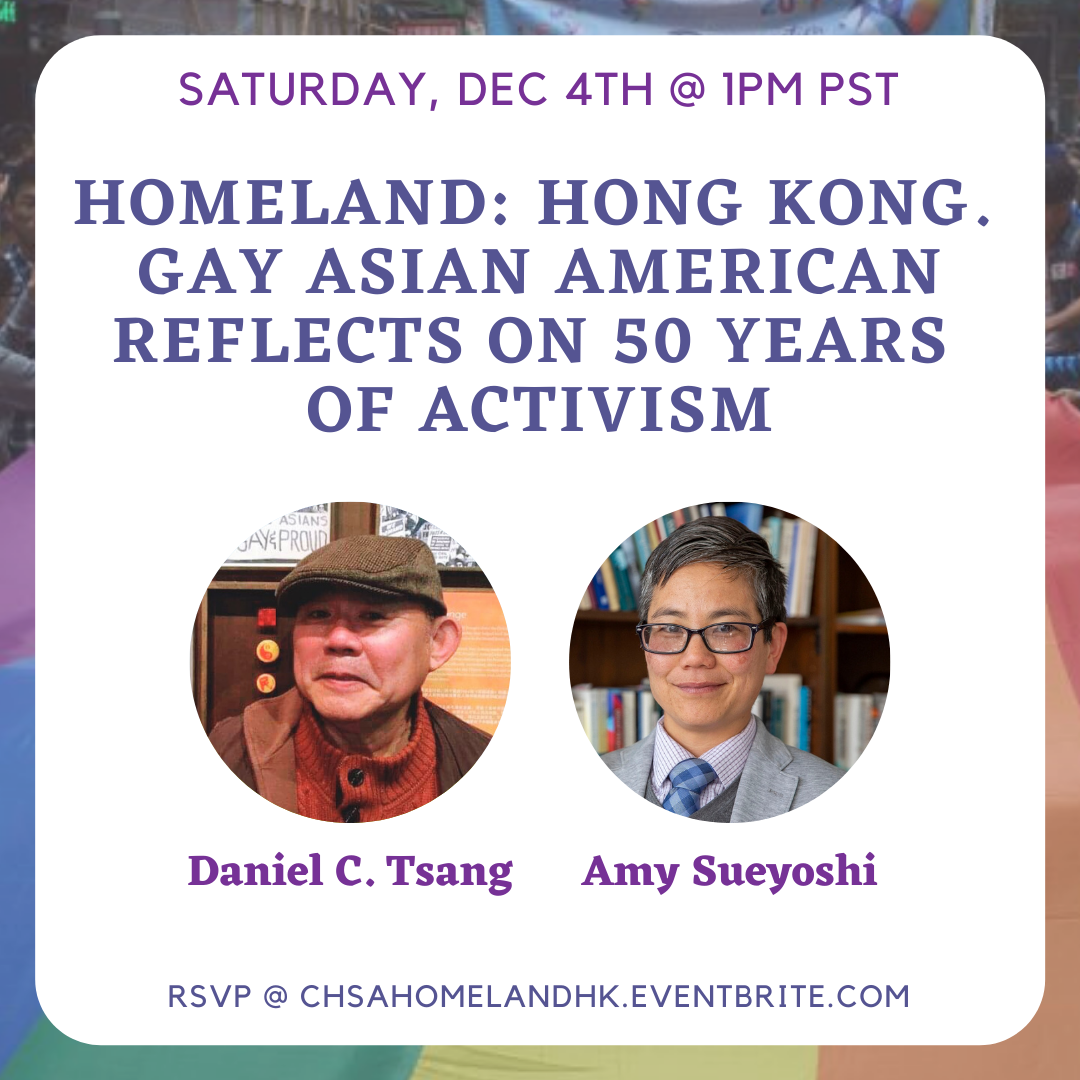 Join CHSA for a conversation with Dan Tsang and Dr. Amy Sueyoshi about social justice and the importance of documenting social change.

Join CHSA for a conversation with Dan Tsang and Dr. Amy Sueyoshi about social justice history and the importance of documenting social change in repressive conditions.

Dan’s activism spans five decades, including protesting the Vietnam War, helping organize the 1975 Ann Arbor graduate student strike—the first in U.S. history, and co-organizing queer Asians during the first March on Washington for Lesbian and Gay Rights in 1979. He has written for alternative, Asian American, gay, and Hong Kong media, and has been producer and host of “Subversity Show,” on KUCI radio and later online, interviewing activists, authors, and indie filmmakers of all stripes. Tsang’s consistent aim throughout has been to record and document social change in the U.S. and Hong Kong.

Join CHSA as Dan takes the audience through his lifetime of activism. Along the way, discussing Home and Identity, Coalition building, Gay Liberation, Resistance, Hong Kong, and the importance of preserving protest memories. Following his presentation, Dan will be joined by Dr. Amy Sueyoshi in a 30-minute conversation and a 30-minute Q&A session.

There will be a 10-minute post-program hangout, so make sure to stick around!

Born and raised in Hong Kong, Tsang attended the University of Redlands and the University of Michigan. He began his career as a librarian in Philadelphia and most recently spent 30 years as a bibliographer and data librarian at UC Irvine, where he was named Distinguished Librarian. A Librarian Emeritus, Tsang was awarded in 2017 a Fulbright Research Scholar grant to research the archiving of protest literature in Hong Kong. His first Fulbright took him to Hanoi in 2004. He lives in Southern California and in Hong Kong.

Amy Sueyoshi is the Dean of the College of Ethnic Studies at San Francisco State University. They are a historian by training with an undergraduate degree from Barnard College and a Ph.D. from the University of California at Los Angeles. Their research area lies at the intersection of Asian American Studies and Sexuality Studies. Amy has authored two books Queer Compulsions and Discriminating Sex. They are also a founding co-curator of the GLBT History Museum, seeded the intergenerational Dragon Fruit Oral History Project at API Equality Northern California, and served as co-chair of the inaugural Queer History Conference 2019 hosted by the Committee on LGBT History.