Lost in Translation 3: Comedy Night at the CHSA Museum 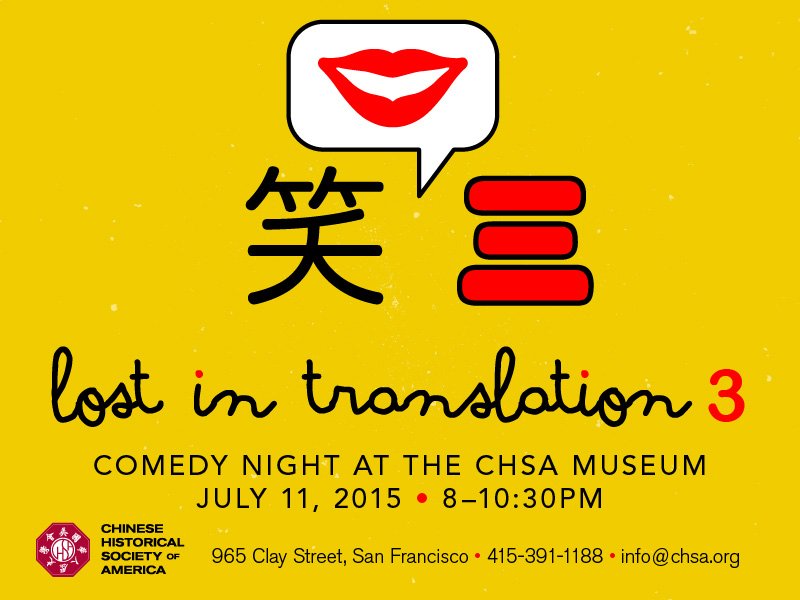 Ready for a night full of laughs and good company? You’re in luck! Our “Lost in Translation” Comedy Show at the Chinese Historical Society of America (CHSA) Museum is back for its third consecutive year. This event benefitting the Annual Fund will feature local Asian American comedic talent and a cash bar.

Special thanks to our event sponsor! 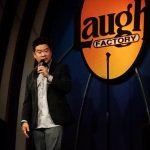 Walter currently co-hosts The Walter & PK Show, a comedy radio show, on AMN Radio AM 1540 Radio Korea. His latest stint as a stand up comic began at the open mic slot for Chocolate Sundaes at the Laugh Factory in Hollywood, CA. Two performances later, Walter was shown so much love from the all-black audience that he was a made a Chocolate Sundaes regular. Shortly thereafter, he became a regular at the Laugh Factory. As a comedy sketch actor, he’s performed with Wayne Brady, Cedric The Entertainer, Mark Curry, Kevin Hart and Damon Wayans. And his voices can be heard on the Tom Joyner Morning Show and the Xbox video game: Bruce Lee: Quest Of The Dragon. Currently, Walter performs at the Laugh Factory, Improv, Punchline, Cobb’s Comedy Club and numerous spots around the country. You may also catch him touring with Slanted Comedy as a comedian and producer. – Facebook | Twitter 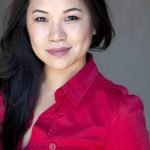 I’m really not that interesting but I’m fun. I hail from Northern California. I was born in San Francisco and raised in Daly City with all of the funky fresh Philipinos. Maboohai! I love the Philipinos. They’re funny, they can dance and party like no other Asians. That’s pretty much me except that I’m not a Filipina. I’m a Korean American. I was raised by very well-educated passionate Korean Christian parents. Typical but not because I obviously didn’t become a doctor or lawyer like my older brother and I don’t work in the corporate world like my younger sister. Yes! I am the black sheep of the family. You know my mama ain’t too proud of that fact. However, I did go to college and actually graduate with a Bachelor of Arts in Drama from UC Irvine with a pretty darn good GPA. By the way, drama majors do more than just take classes where we learn to improv and act like animals. We did that but we also wrote lots and lots of freakin’ papers! My aspiration is to become a successful actress in whatever genre (hopefully comedy) and make lots of paper so I can use it to change the world! Feed the hungry, stop child prostitution, and fund the Red Cross so they can bring immunizations to third world countries so they don’t die of MEASLES for goodness sake. I also hope to meet my prince charming someday and raise little critters of my own. See? I’m typical. Well, not really. I’m also a Holy roller Christian. I love Jesus! God is the reason I’ve lasted this long in Hollywood. So, if you see me at some decadent Hollywood party drinking, laughing and cursing, DON’T JUDGE ME! I’m not perfect. Well, I shouldn’t be cursing or drinking too much. God help me. 🙂 – Facebook | Twitter 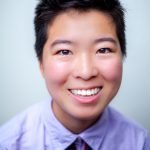 Irene Tu is a stand-up comic, writer, and performer from Chicago, now living in the Bay Area. Some have described her as “sarcastic” but she just tells it like it is. She has been in SF Sketchfest, Limestone Comedy Festival, Cape Fear Comedy Festival, She-Devil Comedy Festival, Chicago Women’s Funny Festival, and was a finalist in Rooftop Comedy’s National College Comedy Competition. She co-produces Laugh Function every Saturday at Pappy’s in Berkeley and a monthly show at Bergeron’s Books in Oakland every 2nd Saturday. – Website | Facebook | Twitter 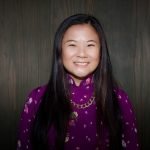 Jenny Yang is a Los Angeles-based writer and stand up comedian who produces the first-ever (mostly) female, Asian American standup comedy tour, Dis/orient/ed Comedy and has been a writer and performer on the viral Buzzfeed videos “If Asians Said the Stuff White People Say” (over 8 million views), “What if Adults had Tantrums Like Toddlers?” and the “Ask An Asian” video series. Jenny was dubbed one of Los Angeles’ “most fascinating people” of 2015 in LA Weekly’s annual “People” issue. She was also a featured standup comic on Joan Rivers’ 2013 Showtime documentary Why We Laugh: Funny Women.