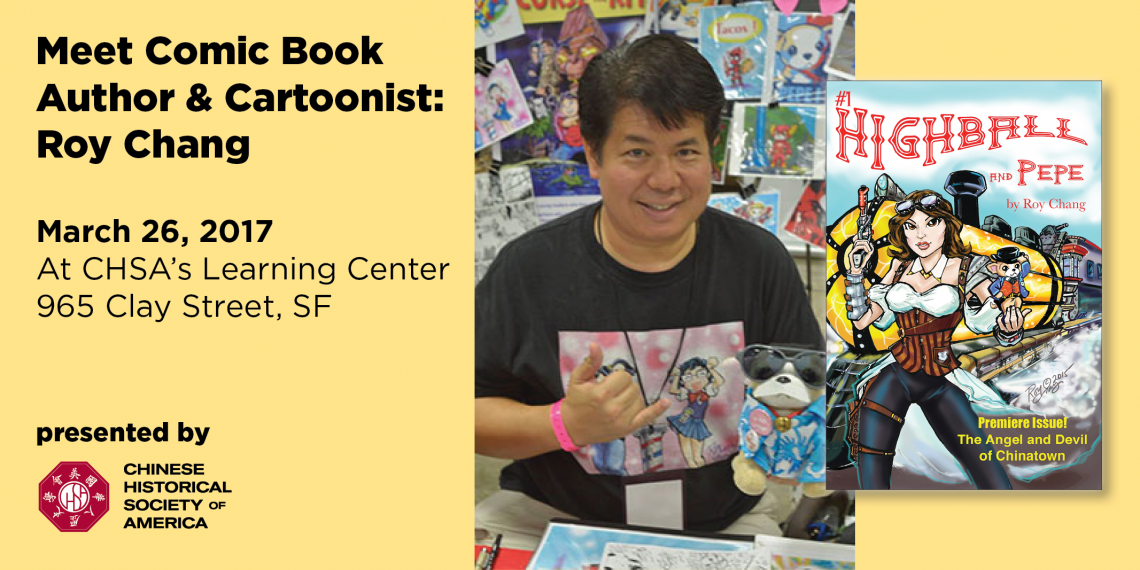 Hawaiian Comic Book Author and Artist Roy Chang will be making an appearance at CHSA on Sunday March 26th to give dialogue about his latest comic book, “Highball and Pepe”, which introduces two Federal Railway agents who travel in their Solar/Steam Train across the country. The first story takes place in 1890’s Chinatown, San Francisco where they meet and join forces with real life Donaldina Cameron (of Cameron House). Ms. Cameron was credited with the rescue and care of over 3,000 young Chinese females from human trafficking and taking on those who profited from the Chinese Exclusion Act. Creative liberty is taken in his story, but the locations and stories of Chinese immigrants facing social injustices are told in the context.

Mr. Chang will also give away free sketches and have open drawing tables for kids. Signed comic books will be available for sale at the event, each book includes a free mini b&w print.

CHSA is dedicated to telling the story of Chinese American experience, where Roy Chang contributes with his comic book / prose style / steampunk medium.

ABOUT ROY CHANG:
Roy Chang currently works as a middle school art teacher, editorial cartoonist, author/ illustrator, and self published comic book creator in Honolulu, Hawaii. He graduated from the Academy of Art in San Francisco in 1990 and since 2006 has visited the Bay Area annually as a tourist. In 2015, he created his first self published comic book in the Steampunk genre combining prose style story telling and black and white comic page illustrations.