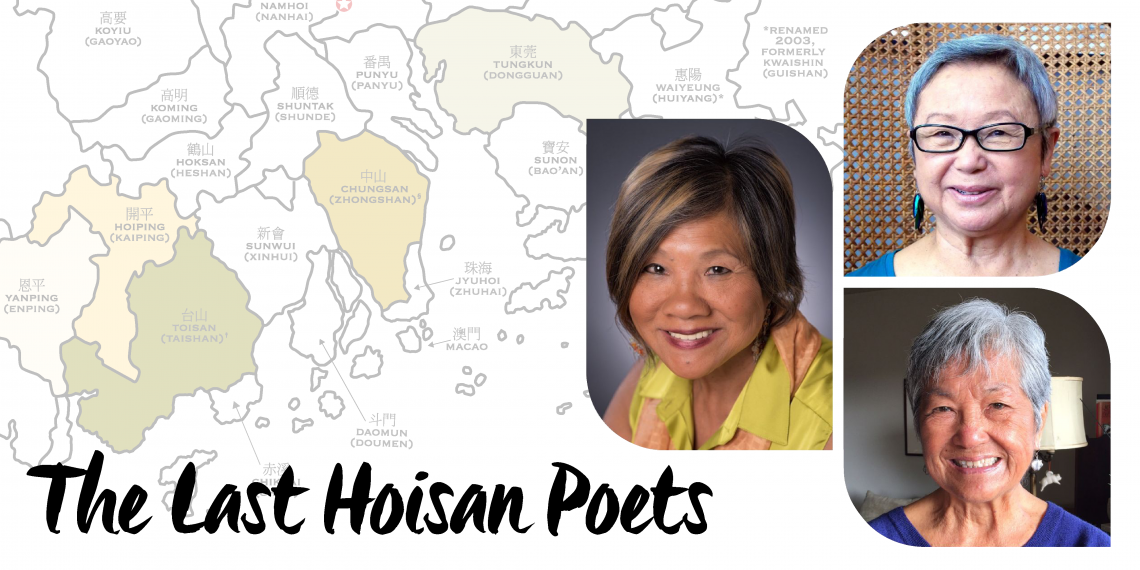 Genny Lim, Nellie Wong, and Flo Oy Wong return to CHSA! These three monumentally influential women artists and poets all trace their roots to China’s Toisan villages, home of the Hoisan-wa (a.k.a. Toisanese/Taishanese) Chinese dialect. They will do a special poetry reading in English and Hoisan-wa, to pay homage to their mother language which is at risk of fading from collective memory.

Tickets include entry to CHSA’s galleries and exhibits. Seats are limited. RSVP today on Eventbrite.com

About the poets:
Genny Lim is a second generation Chinese American born and raised in San Francisco. She served as a former San Francisco Arts Commissioner and San Francisco Jazz Poet Laureate. Her award-winning play Paper Angels has been produced throughout the U.S., in Canada and China. Lim is author of five poetry collections, Winter Place, Child of War, Paper Gods and Rebels, KRA!, La Morte Del Tempo, and co-author of Island: Poetry and History of Chinese Immigrants on Angel Island, winner of the American Book Award. Lim has collaborated with jazz legends Max Roach and Herbie Lewis and Bay Area musicians, Broun Fellinis, Francis Wong, Jon Jang and Anthony Brown. She has also collaborated with Lenora Lee Dance on the texts of its recent on-site immersive performances, Within These Walls and Dreams of Flight, at the Chinese Immigration Detention Station on Angel Island.

Flo Oy Wong, artist, poet, and educator, is a first generation Chinese American born and raised in Oakland Chinatown. Her work as a visual artist and poet explore issues of social justice. She focuses on family, community, and history of Chinese in America through her immigrant parents, bringing to light the lives of the invisible, unrecognized, and underrepresented. As an artist, she has received many awards and has shown locally and internationally. In 2013, The Luggage Store Gallery displayed her 75th birthday show, The Whole Pie, and she collaborated on a musical with Marcus Shelby, Gwah Gai, about her husband Edward Kow Wong who grew up in Augusta, Georgia during segregation. Featured on KQED’s SPARK and the NewsHour with Jim Lehrer, her work is currently being taught in the Art in Action 8th grade Art and the American Experience curriculum. As a poet, she has been published by the Blue Collar Review, Oakland Chinatown EBALDC, and a South Bay on-line literary magazine. In 2018, she published her first book of art and poetry, Dreaming of Glistening Pomelos, to celebrate her 80th birthday. She is currently working on a sexual trauma chapbook I Don’t Cry Anymore co-edited by Kathy Skaggs and Ann Muto, to be published in 2020.

Oakland Chinatown-born, Nellie Wong has published four books: Dreams in Harrison Railroad Park, The Death of Long Steam Lady, Stolen Moments and Breakfast Lunch Dinner. Her poems and essays appear in numerous journals and anthologies. Two pieces are installed at public sites in San Francisco. She’s co-featured in the documentary film Mitsuye and Nellie Asian American Poets, and among her recognitions, a building at Oakland High School is named after her. She’s traveled to China in the First American Women Writers Tour with Alice Walker, Tillie Olsen and Paule Marshall, among others.