Living in Chinatown: Memories in Miniature, Created by Frank Wong

The Chinatown Miniatures Collection was acquired by CHSA in 2004, as a donation from the artist, Frank Wong. This donation consisted of seven miniatures of scenes of Chinatown. The miniatures are on permanent display in CHSA’S Yick Gallery, and they are the subject of an award-winning 2016 PBS documentary Forever, Chinatown by Good Medicine Picture Company.

Born and raised in Chinatown, Frank Wong attended Galileo High School and became a set designer for numerous movies and plays in Hollywood. One of his most famous jobs was for “Magnum PI”. Through his career he spent much of his time working in Hawaii. Now retired and back in Chinatown, he lives on Commercial St., which is close to his childhood home on Grant Ave next to the Golden Gate Bakery.*

Frank Wong has indicated that he feels that the miniatures are merely “frames” for his personal memories of growing up in San Francisco, and his memories of Chinatown businesses and personalities. 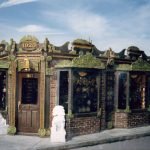