Chinatown was a bustling neighborhood with many businesses, temples, and associations. When the 1906 Earthquake hit the city, it destroyed large parts of the city. Fires completely decimated Chinatown, leaving the neighborhood in ashes and its citizens fleeing to neighbor districts and cities. CHSA’s new exhibit “Earthquake: The Chinatown Story” details firsthand accounts from the people who lived there, how the city had been planning to remove Chinatown, and how the Chinese fought back.

Available as a traveling exhibit: 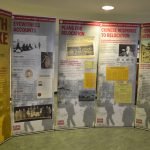 Contact CHSA to request the Earthquake: The Chinatown Story traveling exhibit for your organization.

CHSA has also recreated this online at the Google Cultural Institute, making this important story more widely accessible to the public.

The following are testimonials from the people who were there when the earthquake happened.

Lee Yoke Suey and his family were living Commercial Street when the 1906 Earthquake happened. Even as an American born Chinese, he knew that identity documents would be essential to ability to support his family. As disaster struck their homes, the Chinese did what was necessary to survive.

Chinese were forced to seek shelter in neighboring cities like Oakland in the aftermath of the 1906 Earthquake. Lew Hing, a successful cannery owner opened up his Oakland cannery to provide temporary housing for earthquake refugees.

Seven-year-old Lily Sung, daughter of Rev. N.A. Soo Hoo, was living on Washington Street when the earthquake happened. Because the fire began to ravage the city of San Francisco, its citizens were scrambling to get on the ferry to Oakland to escape. Sung recounts the arduous journey she took with three of her siblings and how they were able to reunite with the rest of her family.

Since 1904, white businessmen and politicians in San Francisco had been plotting to acquire Chinatown because of its prime location. The newspaper “Chung Sai Yat Po” continued to operate — temporarily moving to Oakland. The paper published hand-lettered editorials on how to best handle the rebuilding of Chinatown before the “Westerners” take over.