You are here: Home / Exhibits / Picnic Parade by Jodie Lyn-Kee-Chow 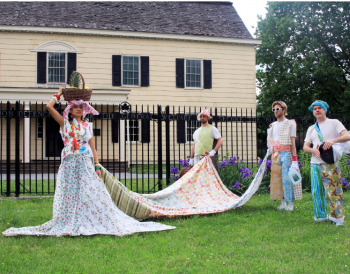 Picnic Parade is one artwork within a series of “picnic performances” that involve the artist creating colorful tablecloths collaged into quilted picnic blanket dresses.

Though slavery was abolished in the United Kingdom’s colonies in 1834, as a leading producer of sugar, the British Empire turned to recruiting Chinese, Indian, Irish, Germans, and freed African slaves, among others, to replace the outlawed slave system. The year 1854 saw an influx of Chinese immigration into Jamaica. As Chinese continued to arrive, Chinese-Jamaican communities grew. Today, there are an estimated 76,000 Chinese Jamaicans in a country with a population of just under three million.

Artist Jodie Lyn-Kee-Chow was born in Manchester, Jamaica, to a Chinese-Jamaican father and an Afro-Jamaican mother. The African diaspora, European colonialism, and Chinese migration make up significant parts of her origin story. The ancestral convergence in Jamaica (slave owners, enslaved Africans, and Asian migrant workers) followed by her family’s immigration to the United States, informs the artist’s practice.

Picnic Parade is one artwork within a series of “picnic performances” that involve the artist creating colorful tablecloths collaged into quilted picnic blanket dresses. The artist wears these costumes while parading into a park. Dressed in matching costumes, her co-performers play the role of servants, who accessorize her dress with wicker baskets filled with local and exotic fruits and water. The work creates a shared multi-cultural dining and leisure experience. People from all walks of life are invited to gather, have a drink of water, and converse harmoniously. Through her art, Lyn-Kee-Chow explores values present in both her Jamaican and Chinese ancestries, including the concepts of hospitality, generosity, and the ritual of sharing.