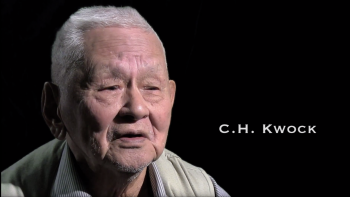 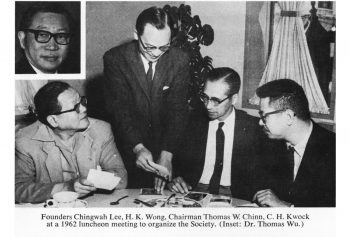 It is with great sadness that we acknowledge the passing of Chan Hoon Kwock (known to many as C.H. Kwock) on July 20, 2019, four days shy of his 99th birthday. C.H. Kwock was the last surviving founder of the original five (Thomas W. Chinn, Chingwah Lee, H.K. Wong and Thomas W.S. Wu) who established the Chinese Historical Society of America in 1963.

C.H. Kwock was born in Honolulu, Hawaii on July 24, 1920 to a merchant couple from Sekkei, Zhongshan as the first of nine children. His childhood was spent traveling back and forth between Hawaii and Hong Kong during 1926 to 1930. Through the British schools in Hong Kong, Kwock learned to speak both Chinese and English, a skill which proved to be an asset for him later in life. Eventually he settled in Hawaii during 1937 because of the second China-Japan war. Kwock had a two-year stint as a teacher in a school he built in the poor section of Kilauea, teaching twelve students how to read and write.

In 1947, Kwock moved to San Francisco to work with his sister, Lily, and her husband, Dai Ming Lee, editor of The Chinese World. The Chinese World was the first newspaper in America offering news and stories of interest to the Chinese community in both Chinese and English. While working there, he eventually became an editor and public relations representative, writing editorials urging John F. Kennedy and Robert Kennedy to change legislation regarding Chinese immigration quotas. Throughout his career he met several famous people, most notably Albert Einstein, who gave him an autographed photo. Later on, he and H.K. Wong presented President Lyndon B. Johnson an honorary membership in CHSA.

Kwock is also known for his translated poetry and childrens’ books with Vincent McHugh such as The Bull with Magic Eyes and Other Chinese Fables, Why I Live on the Mountain, and Old Friend From Far Away.

Through his connections with The Chinese World, Kwock met H.K. Wong and Thomas Chinn. Chinn initially wanted Kwock to help him publish his writings in the English section of The Chinese World but later asked Kwock to join the Chinese Historical Society of America, feeling that he would be a great asset to the organization. Kwock was hesitant, but Wong convinced him.

These initial meetings would take place once a week or once a month in member’s homes. They would often discuss the relevancy of Chinese America history to society and go on field trips and collect artifacts. In addition to giving input and attending meetings, Kwock would publish stories about CHSA in The Chinese World.

C.H. Kwock was honored at the CHSA Annual Membership Luncheon on January 11, 2014. The video of his 2013 interview with Rick Quan is viewable on CHSA’s YouTube page: https://youtu.be/gQZ0kx3vFZs

Befitting a man of simplicity, C.H. did not wish to have a memorial service but merely requested that his ashes be scattered at sea.