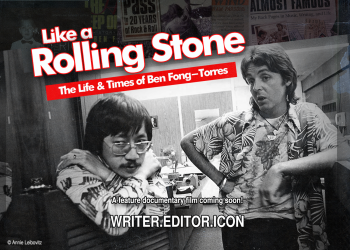 The Life and Times of Ben Fong-Torres

The lights, the crowds, the music! Ben Fong-Torres covered it all at Rolling Stone as a legendary writer, rock journalist and the magazine’s first music editor. The documentary about Ben’s life is an epic sweep through the world of rock and roll. The American-born son of Chinese immigrants, Ben grew up in Chinatown with only a radio to the outside world. Driven by a passion for music and writing, and a wicked sense of humor, his groundbreaking work helped define American culture. He became a voice of a generation which changed America forever.

Support the Making of the Film

Donations of any amount greatly appreciated.
Donors at $1K to $50K levels will be thanked with their names listed in the film’s End Credits.
To donate by check:
Make check payable to: “Chinese Historical Society of America” and write “LIKE A ROLLING STONE MOVIE” in the memo line. Mail to:
CHSA
965 Clay Street
San Francisco, CA 94108