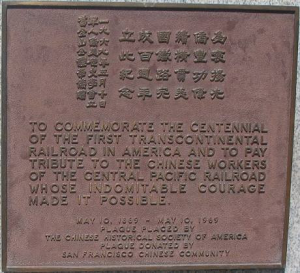 CHSA is proud to be on hand to document an historic event, which will close a chapter of our own history begun in 1969. With the support of community organizations, CHSA successfully produced two commemorative plaques to honor the Chinese railroad workers who built the Transcontinental Railroad. The plaques were installed in Sacramento, California and Promontory Summit, Utah. CHSA President Phil Choy was invited to make remarks at the official Centennial program in Ogden, Utah, but was left off the program without any notice. Chinese railroad workers went unrecognized at the Centennial.

45 years later, on May 9, 2014, the Department of Labor will induct Chinese Railroad Workers into the Labor Hall of Honor. Chinese workers will finally receive their due. 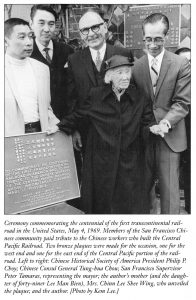 12,000 Chinese worked on the Central Pacific Railroad from 1865-1869, risking their lives to carve a path through the granite of the Sierra Nevada Mountains to join the Union Pacific Railroad at Promontory Summit to establish the First Transcontinental Railroad. The hard work of the Chinese was barely acknowledged, and individual Chinese were rarely named.

This induction ceremony presents an opportunity to change the historical narrative. Descendants of railroad worker families have been invited. At least 20 will attend — to honor the memory and legacy of their pioneer forefathers.

In their honor, the Chinese Historical Society of America will document this unprecedented gathering and launch a NEW chapter, by sharing the stories of the descendants of known Chinese railroad workers who helped to build the American West.

Articles about the 1969 Centennial Commemoration of the Transcontinental Railroad

(click image to view a pdf of the article) 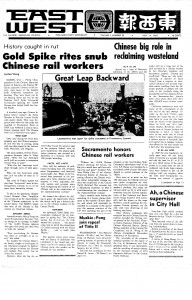 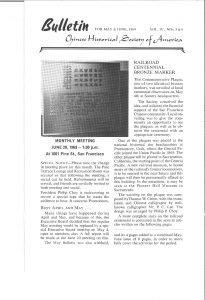 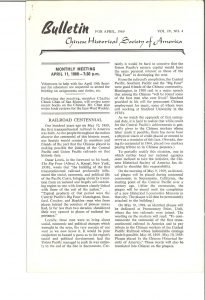 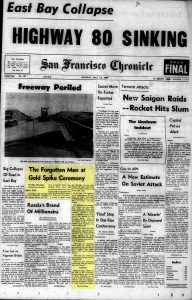