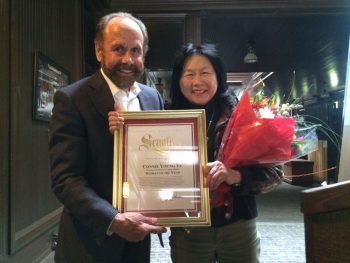 Photo by Friends of Huddart and Wunderlich Parks

On April 24, 2016 Connie Young Yu was awarded the State of California 13th Senate District Woman of the Year award by Senator Jerry Hill. Through her outstanding work with Chinese Historical Society of America, the Hakone Foundation, Asian Americans for Community Involvement and her work on the Chinese Railroad Workers in North America Project, Senator Hill wanted to surprise her with this honor. After careful planning, she was presented with this award during the Folger Stable Speakers Series in Woodside, CA.

Each year, Senator Hill honors two women from the Northern and Southern portions of the 13th Senate District with the “Woman of the Year” award. While the nominations are kept secret, the criteria for selection are women whose contributions to the district have been outstanding.

Thank you to Senator Hill, and congratulations Connie!