The colorful, vinyl tablecloths in Jodie Lyn-Kee-Chow’s “Picnic Parade” bring back nostalgic memories from her childhood in Jamaica and represent the island’s historical ties with China. Her performance piece invites viewers to participate in a social gathering that breaks down social, ethnic, and cultural barriers. Additionally, Lyn-Kee-Chow’s performance uplifts the diverse ethnic cultures that have created a lasting impact in Jamaica.

After Britain abolished slavery in 1834, its colonies in the Caribbean islands began looking for new labor sources to keep up with their agricultural production. At this time, China was struggling from internal conflicts caused by civil wars, high taxes, and hunger. Adding to their troubles, Western nations attempted to force open China’s borders during the Industrial Revolution, which ultimately led to the two Opium Wars in the 1840s and 1860s. Nations such as Britain used this opportunity to contract the Chinese working class as indentured laborers. The British Empire recruited Chinese people as well as people from India, Ireland, Germany, and East Africa to serve as indentured laborers, replacing enslaved Africans. However, only in Jamaica, Trinidad, and British Guiana (present-day Guyana) did they notably recruit the Chinese.

The presence of Chinese indentured laborers in Jamaica can be traced back to 1854. During this year, two ships from Hong Kong and Panama arrived carrying Chinese laborers. Most Chinese immigrants were from the southern provinces of Fujian (福建) and Guangdong (廣東) in China and of Hakka descent. Men made up the majority of laborers. Many were married and separated from their families who remained in China, which was likely why many returned to China at the end of their contract. Additionally, many Chinese men who arrived as bachelors married local Jamaican women. These marriages led to the beginning of a mixed population that by 1943 was large enough to be added to the Jamaican census under the term “Chinese Colored.” 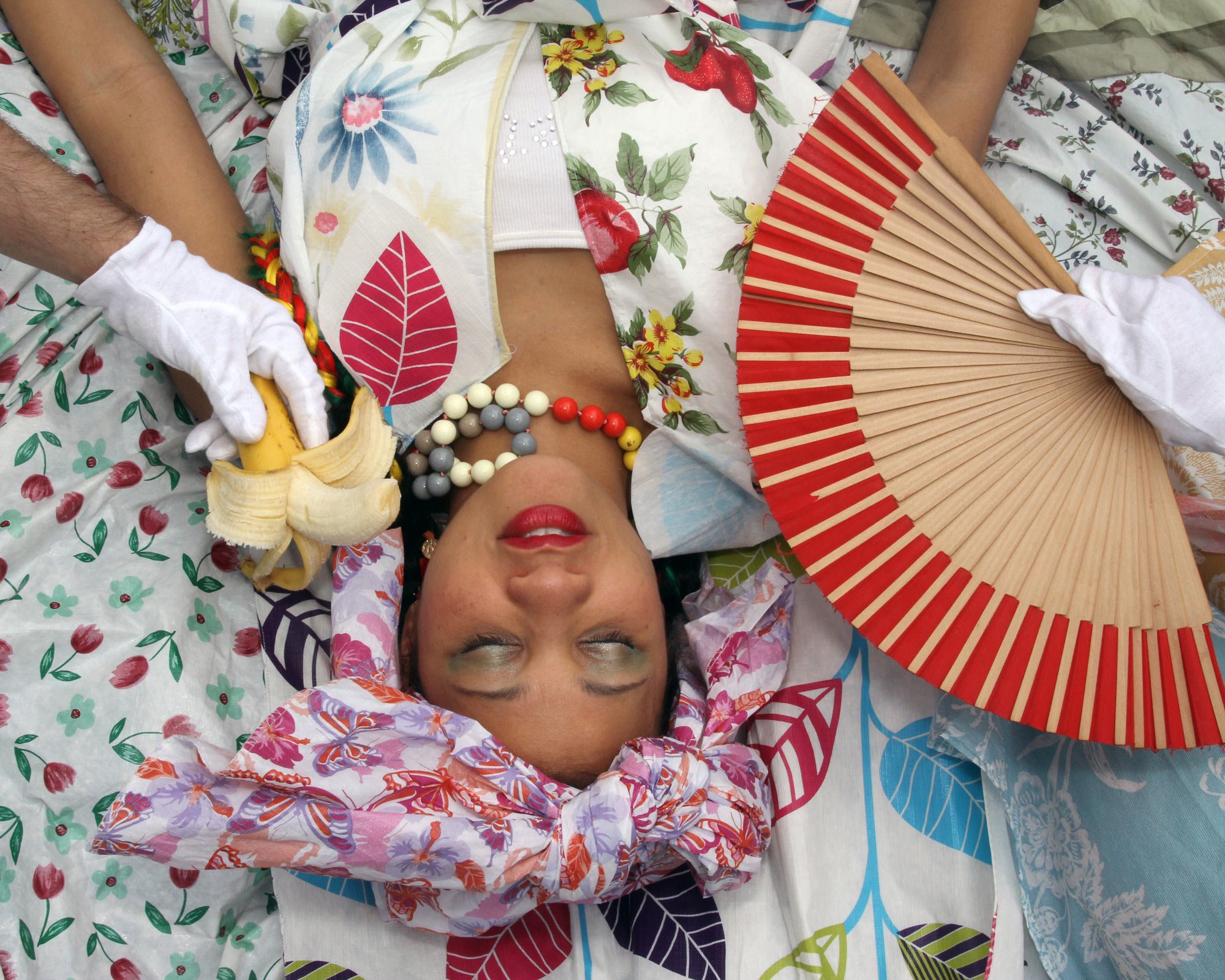 Photograph by M. Charlene Stevens
Thirty years later, in 1884, the third ship from Hong Kong arrived in Jamaica via San Francisco. However, this time businessmen traveled with their wives and children. It is this demographic shift that arguably was the reason behind the Chinese community building a cemetery at the beginning of the twentieth century. Historically, Chinese cemeteries have been located close to families so that the deceased can be visited and celebrated frequently according to Buddhist, Confucianist, and Daoist beliefs. Before entire Chinese families began settling down in Jamaica, men either returned to China or married local women, sometimes converting to Christianity. However, as the Chinese community grew, so did their desire to bury their dead locally in a traditional and dignified way according to Chinese culture.

In 1907, after the Kingston earthquake, Chinese cemetery development began. This was made possible by a group of Chinese businessmen, including Chin Lenn-kao and Chang Sheng, who bought eleven and a half acres of land in Kingston in 1904. The first burial took place in 1912 and since then there have been over 3,200 burials. Throughout the twentieth century, the cemetery went through periods of disrepair, but the community consistently came together and collected donations for its repair. After the first repairs were completed in 1929, the Chinese Benevolent Society began holding ceremonies to honor and remember the dead. These ceremonies took place during the Chinese spring and autumn festivals, Tsing Ming (Gah San) and Chung Yang, respectively. Children from the Chinese Public School also participated in these festivals, singing songs of remembrance to their ancestors. Although Chinese residents make up only three percent of Jamaica’s population, this cemetery is evidence of the lasting impact the Chinese community has had on the island.

It is this history of Chinese migration to Jamaica that serves as the backdrop for Jodie Lyn-Kee-Chow’s artwork. Lyn-Kee-Chow is an interdisciplinary artist who currently lives in Queens, New York. She received her BFA with honors in Painting from the New World School of Arts, the University of Florida in 1996, and her MFA in Studio Art and Combined Media from Hunters College, CUNY in 2006. The artist was born in Manchester Parish, Jamaica to an Afro-Jamaican mother and a Chinese-Jamaican father. Her artwork, which relies heavily on experimentation, reflects the cultural and ethnic experiences of Chinese-Afro-Jamaicans. Both of her grandmothers were farmers, and their countryside homes in Jamaica serve as nostalgic reference points for many of her performances and installation pieces. Additionally, Lyn-Kee-Chow’s maternal grandfather was a tailor and greatly influenced her decision to design and assemble all the costumes for her performances. In an interview, Lyn-Kee-Chow stated, “I have a strong passion for both fashion and design, and performance art was the outlet that allowed me to bring these two elements to life.”

Lyn-Kee-Chow engages with her audience by encouraging them to overturn ethnic, racial, gender, and geographical barriers in a contemporary yet folkloric setting. In her performance “Picnic Parade,” Lyn-Kee-Chow uplifted the common marketplace woman by playing the role of the African spirit, “Oya.” She used vinyl tablecloths, which are both inexpensive and common items found in the average Jamaican home, as the primary fabric of her costumes. The artist chose this material because it was manufactured in China and arrived in Jamaica through trade, referencing the history of trade between the two countries. Additionally, these vinyl tablecloths were sold in Chinese shops, highlighting the many Chinese businessmen who have remained in Jamaica over the centuries.

Lyn-Kee-Chow models her costume for “Picnic Parade” after the Jamaican national dress, the Quadrille. However, she did not simply use the pattern that most closely resembles the Quadrille, which is known as the red madras or the plaid, striped, or checkered pattern. Instead, the artist used multiple tablecloths of different styles, patterns, and colors. Through this modification of the dress, Lyn-Kee-Chow captured the audience’s attention and began to direct them towards a new and alternate reality. In her utopia, the queen is a person of color who brings together communities across boundaries of geography, race, or socioeconomic status to share in the act of nourishment.

“Picnic Parade,” which took place through the streets of Queens, New York, was the first iteration of a series of “picnic performances” calling attention to this utopic alternate reality. After walking through the streets of Queens with a basket of fruit on her head, Lyn-Kee-Chow and her procession arrived in front of King Manor Museum, a historic abolitionist home. Upon arrival, they sat down on the grass, used her dress as a picnic blanket, and shared water and fruit with the audience. This spectacle, as the artist called it, brought to light questions about social, ethnic, and cultural boundaries. Lyn-Kee-Chow demonstrated the role of immigrants in the production of food as well as the social significance of sharing fruit with others.

Lyn-Kee-Chow’s performance raises a series of questions. What kind of world can we create if people of color are not only elevated to their rightful place in society but also appreciated and supported with no malicious intent by those of different ethnic backgrounds? Taking this one step further, what kind of society can we create if we all uplift and support each other regardless of social, ethnic, or cultural background?

Image credits above courtesy of the artist and the photographer M. Charlene Stevens. 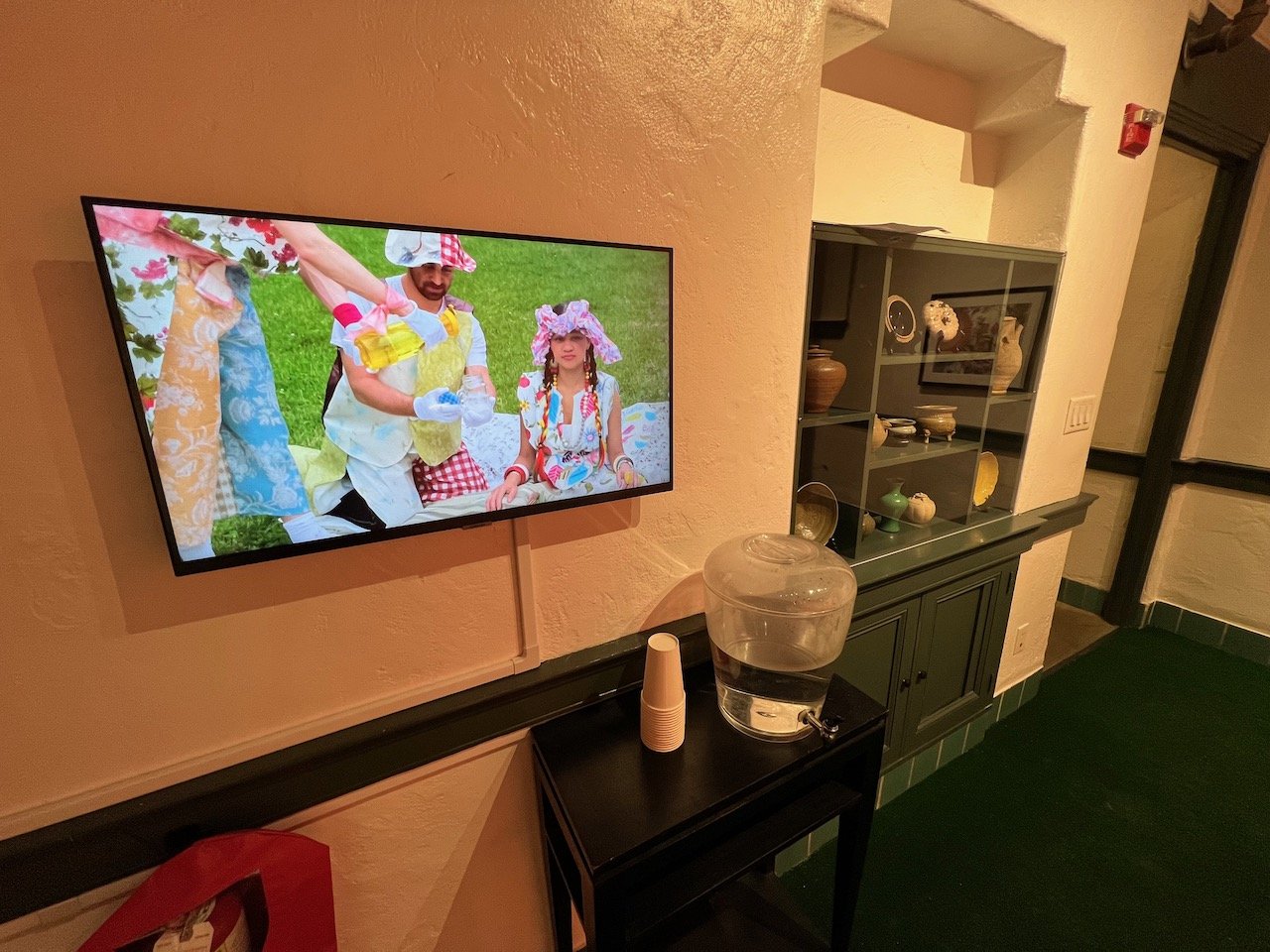 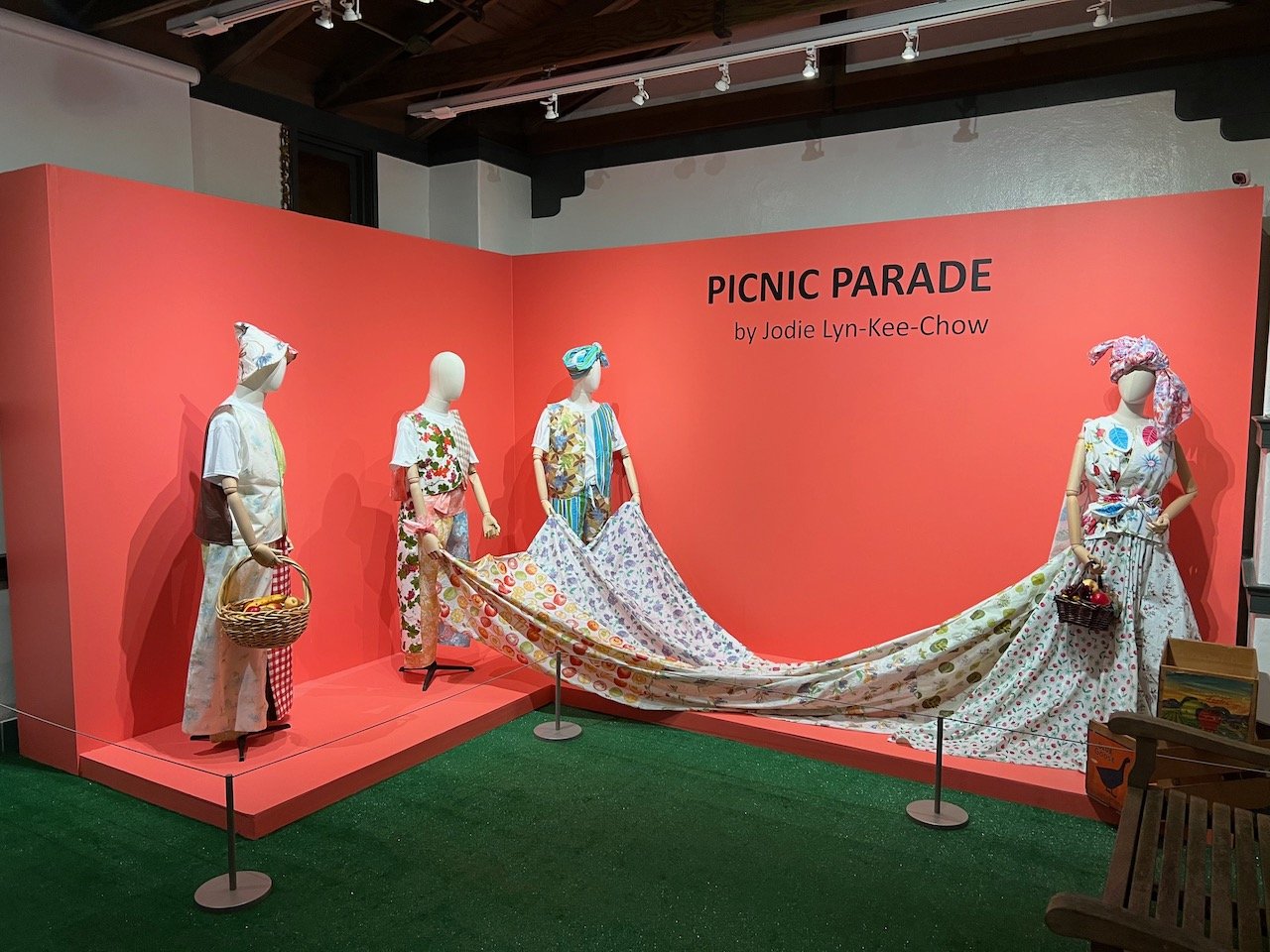 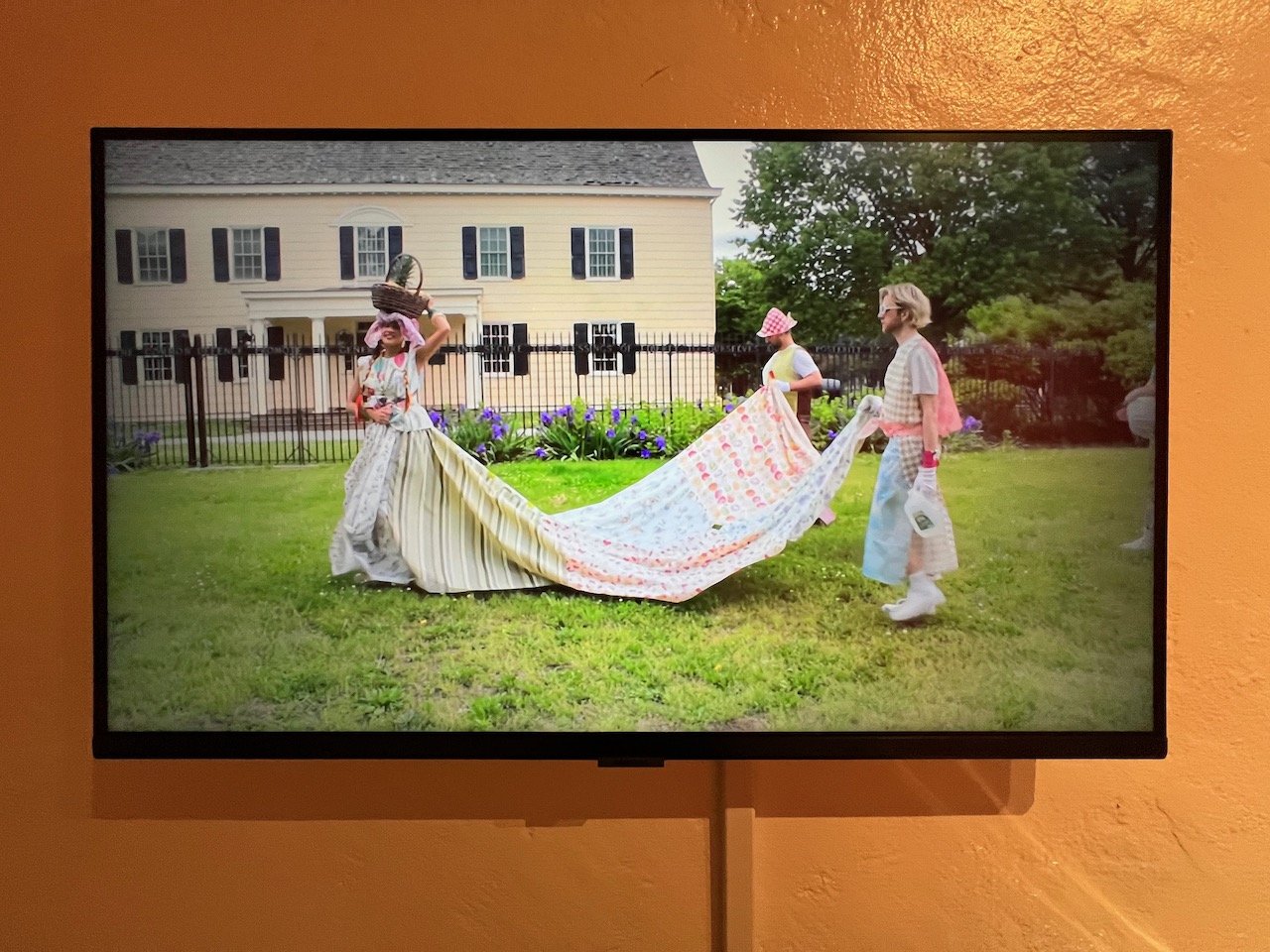 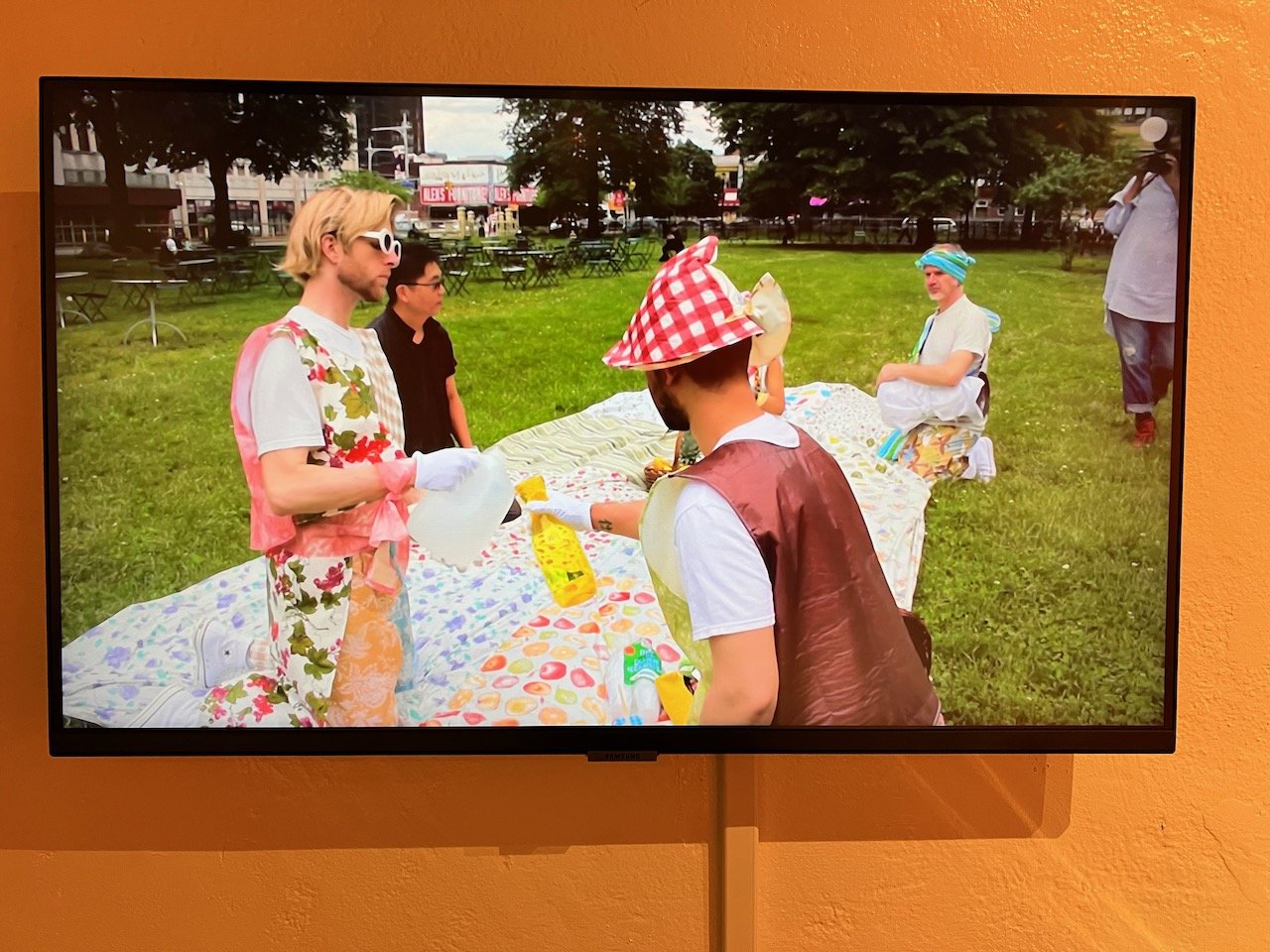