Winner of the 2015 American Book Award and now available in collectible hardcover, Forbidden City, USA captures the magic and glamour of the Chinatown nightclub scene, which peaked in San Francisco during World War II. In the 1930s and ’40s, audiences flocked to nightclubs to escape the problems of the day with a cocktail and a show. Oscar®-nominated filmmaker Arthur Dong spent thirty years interviewing the entertainers from this era, many of whom time had forgotten, and collecting hundreds of rare images and objects. The result is a sexy and insightful exploration of a time when Asian Americans pushed against exploitation and racism—as well as expectations from within their own community—to pursue their dreams of working in show business. 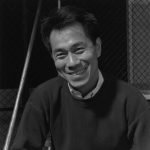 San Francisco native Arthur Dong is a multi-awarding winning filmmaker and author whose films examine anti-gay prejudice (Family Fundamentals, Licensed to Kill and Coming Out Under Fire) and Asia America (Sewing Woman, Forbidden City, U.S.A. and Hollywood Chinese). Among his film excellence awards are an Oscar® nomination, three Sundance Film Festival awards, the Peabody Award, the Berlin Film Festival’s Teddy Award, and five Emmy nominations. Arthur’s public service honors include the Pioneer Award from the Organization of Chinese Americans, the “Out 100 Award” from Out Magazine, and San Francisco State University’s 2007 Alumnus of the Year Award. Besides film production, Arthur has served as a curator for the exhibitions “Hollywood Chinese: the Arthur Dong Collection” (Chinese America Museum, Los Angeles), Chop Suey on Wax: The Flower Drum Song Album (Chinese Historical Society of America Museum, San Francisco) and Forbidden City,USA: Chinese American Nightclubs, 1936-1970 (San Francisco Public Library), which served to launch the publication of his book by the same name; the book was recently awarded a 2015 American Book Award and the Independent Publisher’s “IPPY” Award. Funding for his work includes grants from National Endowment for the Humanities, Ford Foundation, Sundance Institute, MacArthur Foundation, National Endowment for the Arts, and the Corporation for Public Broadcasting. A former Rockefeller and Guggenheim Fellow, Arthur served on the Board of Governors at the Academy of Motion Picture Arts and Sciences, the National Film Preservation Board at the Library of Congress, and the boards of Film Independent and Outfest. His most recent film is The Killing Fields of Dr. Haing S. Ngor. He is currently Distinguished Professor in Film at Loyola Marymount University School of Film and Television in Los Angeles, one of the top ten film schools in the nation.