By Connie Young Yu
Mrs. Lee Yoke Suey, widow of an American-born citizen, returning to San Francisco from China with her family in January 1924, was barred from entry, separated from her children and imprisoned on Angel Island. She had several strikes against her: she was born in China, therefore “an alien ineligible for citizenship” and even though she had re-entry papers, she was a widow and therefore “without status.” The Angel Island Immigration Station Board of Inquiry ordered Mrs. Lee’s deportation after she tested positive for liver fluke, a non-contagious and treatable condition. With the aid of a lawyer, she appealed her case as her distraught children stayed in Chinatown. After an arduous, costly legal process, Mrs. Lee was released by order of the 9th Circuit Court of Appeals after spending 15 and a half months in the Chinese detention barracks. 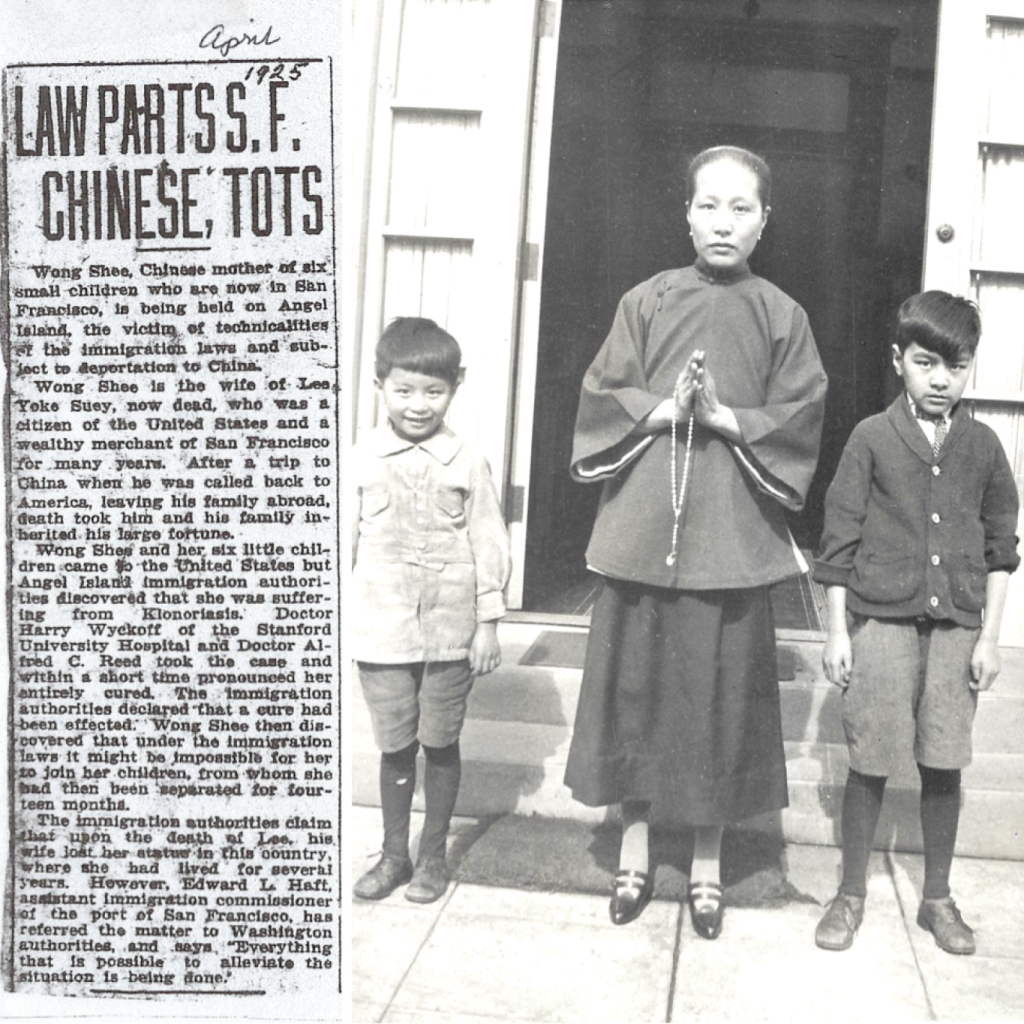 This the story of my maternal grandmother told in the 2010 CHSA exhibit and video, Detained at Liberty Door, produced by Barre Fong. In the video, my mother, Mary Lee Young, tearfully describes what it was like to for her and her young siblings to be separated from their mother those many months without knowing her fate. It was torture.

This is one story of how the first restrictive immigration law, the Chinese Exclusion Act, affected one individual. It happened to many thousands of Chinese without a happy ending.

Before 1882, there were no exclusionary immigration laws. Mrs. Lee’s father-in-law, Lee Wong Sang, my maternal great-grandfather, came like thousands of his kinsmen to work on the Transcontinental railroad in the 1860s, and there was no exclusion of Chinese then. The rallying cry of “the Chinese Must Go” rose out the white labor movement after the railroad was built. The law of 1882 passed by Congress made the Chinese laborer the first illegal alien. This federal act also prohibited Chinese from naturalization to citizenship, dehumanizing a race of people by the law. Subsequent exclusion rulings closed loopholes, and extended restrictions to all Asians. The immigration law of 1924 aimed at Japanese picture brides prohibited the entry of all “aliens ineligible for citizenship”.

Because of the Chinese Exclusion Act (1882-1943) there were those who lied to immigration authorities, claiming they were children of citizens and entered under false papers. These were the “paper sons” and “paper daughters,” and some notable Chinese Americans today are their descendants.

In the 1950’s the term “illegal immigrants” became associated with migrants crossing the southern border. Operation Wetback deported thousands of Mexicans working in the U.S., tearing families apart. In the 21st century ICE raids resulted in the deportation of undocumented immigrants who have lived and worked in this country most of their lives, even those with American-born children. President Trump fosters fear and hatred of immigrants from Mexico and Central America, characterizing them as dangerous criminals and terrorists. Many are from El Salvador, Guatemala and Honduras fleeing life-threatening situations and seeking a better life for their families. These refugees and asylum-seekers are arrested at the U.S. border and detained indefinitely. This is the message from the Trump Administration: No longer will America offer refuge to “the huddled masses yearning to breathe free.” They are bad people and do us harm. America first.

Attorney General Jeff Sessions announced a “zero tolerance” policy on April 6, 2018 that criminally prosecutes anyone who enters the country illegally. Children will be separated from their parents and locked up elsewhere. This should be a deterrent for those from Central America trying to come here. Take their children away.

That was a breaking point. News reports of babies being torn from their mother’s arms and images of weeping children and parents and created outrage throughout the world. It was a wake-up call for Americans across the nation. Because of public and political pressure, President Trump backed down on the policy of separating children from their parents. Lawyers filed suits on behalf of the detained and a court order demanded that young children under 5 be reunited with their parents by July 10 and the rest of the children, by the end of July. Chaos and confusion followed, as authorities scrambled to locate the children and match them up with their parents. The administration could not comply with the court ordered deadline for the little ones, and needed an indefinite extension.

The Administration, using several government agencies to carry out the zero tolerance policy, did not have a process of family reunification. Their lives were considered so unimportant, the authorities did not make the effort to properly document the children and identify their parents. These were dark-skinned people from Central American countries and spoke Spanish. Would Trump have allowed this to happen if the parents and their children looked like Norwegians? The racism of the policy is blatant. 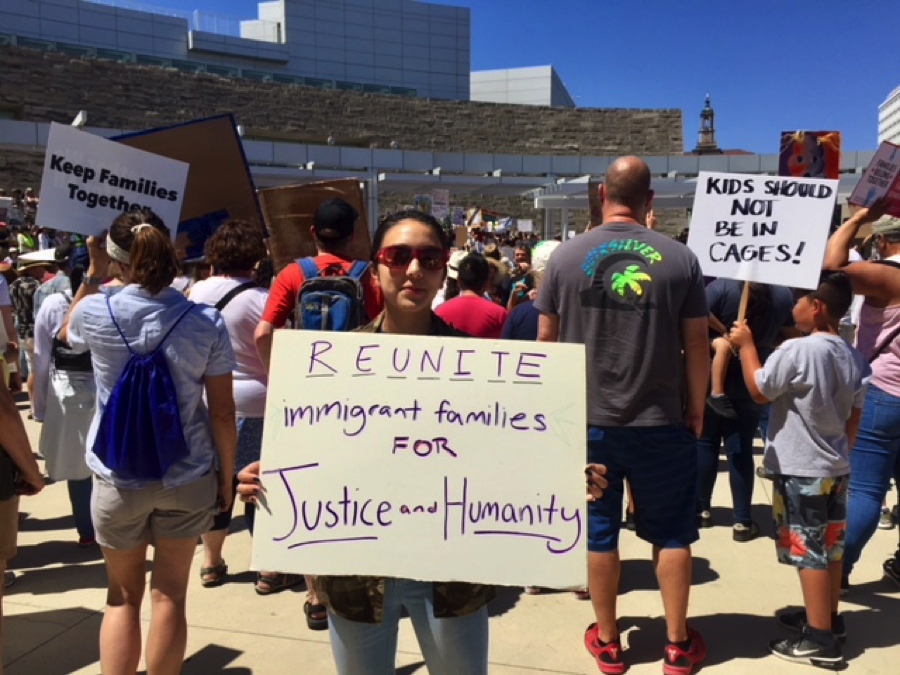 Our history of struggle for justice against racial discrimination gives us fuel for action. CHSA remembers 1882 for 2018. The Chinese Exclusion Act was in effect for 61 years. How long will “zero tolerance” last?

The Trump Administration aims to take away our identity as a racially diverse society and a nation of immigrants. We won’t let it happen. This is a defining moment in American history. People are taking the moral leadership not shown by their government, by organizing protests, pressuring their representatives, demanding political action, and supporting civil rights groups. Lawyers of the American Civil Liberties Union are working with the courts to reunite families as quickly as possible. Those who have never before spoken out before are appearing at community meetings and rallies, all for the sake of the children crying for their parents.

How many migrant children remain locked away? Where are these facilities located? The Trump Administration is not telling us the truth. In fact, from the start, there was no responsible accounting for the number of children separated from parents, first saying it was 2300. Now it’s “less than 3000.” We must demand that every one be located and reunited with parents, and each family be treated fairly and humanely. They’re within our borders now. We really care, and those children really, really count.