You are here: Home / Archives for phil choy 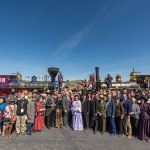 On May 10, 2019, CHSA Board Emeritus, historian and railroad worker descendant Connie Young Yu represented CHSA at the Spike 150 celebration. Her speech opened the event at Promontory Point, Utah, celebrating the 150th Anniversary of the U.S. Transcontinental Railroad. Connie’s speech paid homage to Chinese railroad workers and called for the reclaiming of immigrants’ rightful place in history. Her presence also fulfills a mission begun 50 years ago by CHSA President Phil Choy at the Centennial. Below we’ve rounded up press coverage of this historic event: NBC News: “Thousands gather to reclaim Chinese railroad workers’ place in history” by …  END_OF_DOCUMENT_TOKEN_TO_BE_REPLACED

Thursday, May 09, 2019 By Terray Sylvester PROMONTORY, Utah (Reuters) – Connie Young Yu says that when her parents joined a delegation of fellow Chinese-Americans attending a 1969 event commemorating the centennial of the first U.S. Transcontinental Railroad, they were snubbed, upstaged by Hollywood star John Wayne. Now 50 years later, she and others descended from Chinese immigrants who built much of the cross-country rail line are looking forward to the 150th “Golden Spike” anniversary in Utah for rightful recognition they say is long overdue. “It’s our connection to and participation in American society,” Yu, 77, a board member of …  END_OF_DOCUMENT_TOKEN_TO_BE_REPLACED 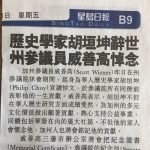 Updated 4/14/2017: A memorial service for Philip Choy will be held Sunday April 23, 2017 at 1:00 pm on Treasure Island at the site of the 1939 Golden Gate International Exhibition (1 Avenue of the Palms). More details and a guestbook to sign can be found here > We are especially grateful to those who have recently contributed to CHSA in Phil’s memory. A running list of donors can be found below. Thank you for helping CHSA continue Phil’s passion of studying and promoting the history and experiences of Chinese in America. CHSA is collecting links to tributes & obituaries …  END_OF_DOCUMENT_TOKEN_TO_BE_REPLACED